Is this the office of the future ?

Previous Next
Is this the office of the future ?

The pessimist in me has a very clear image of the office of the future: those pink gelatinous pods from The Matrix, where insidious robots plug the internet directly into the backs of our brains while harvesting our vital juices.

But perhaps that’s looking a little too far ahead. The office of 2028 or 2038 will likely reflect the dominant trend of today: the use of science to create what might be called ‘productive wellbeing’.

To find out more, MT left its crystal ball behind and flew to Munich, where US-based Steelcase is prototyping the future at its new learning and innovation centre, or LINC.

Steelcase has a curious history. In the last few decades, it’s transitioned from an office furniture manufacturer to a company that convinces you that you need office furniture in the first place. Its focus is now on researching how people thrive in a workspace (unsurprisingly, it hasn’t signed up to the ‘why don’t we all just work at home and save money?’ school of thought), then designing the furniture to match.

In the LINC – part design studio, part working office, part client showcase – the company is applying everything it’s learned to its own workspace, with some interesting results. 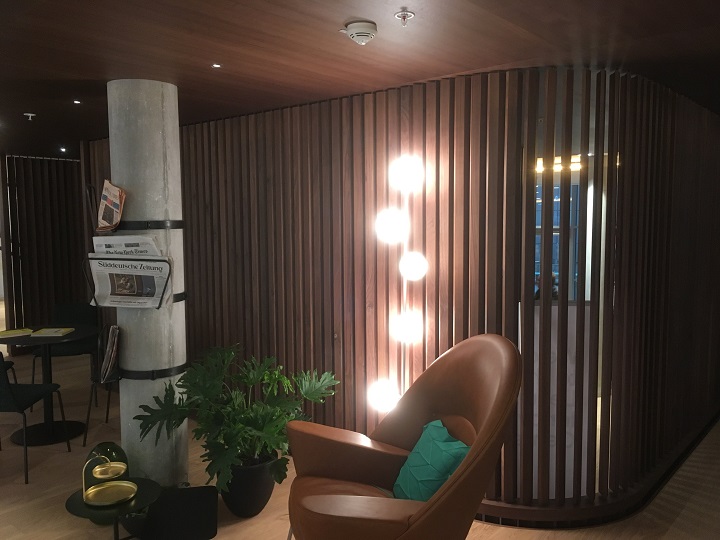 You were expecting hi-tech perhaps? Plants may be a few hundred million years old, but they remain on wellbeing’s cutting edge. Research has shown that biophilic design reduces stress and anxiety. Unsurprisingly, the LINC is subtly adorned with greenery. See the shrub in this casual workspace (no, it’s not a hotel lobby). 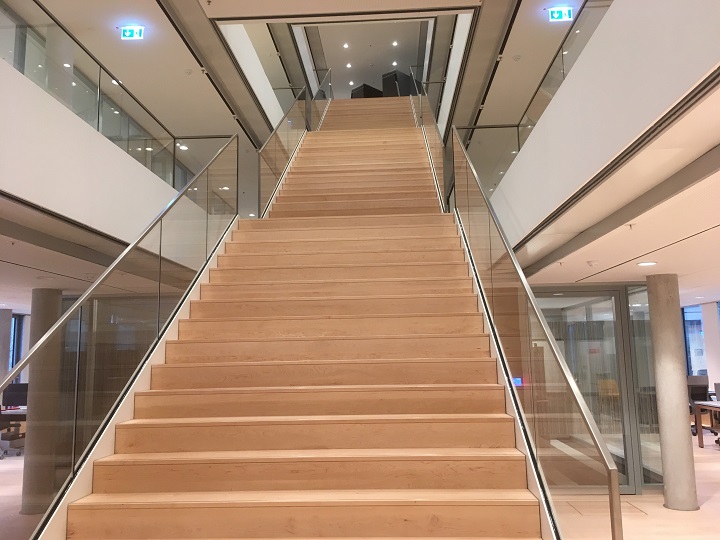 The most unusual feature of the LINC is its central staircase. Roughly 50% wider than you’d expect in an office of its size, it passes directly from the first to the fourth floors without turning back on itself. This has two major effects: the first is that you can see up three flights of stairs, which is slightly trippy*.

The second and more important is that it encourages casual, serendipitous exchanges: you’re statistically much more likely to bump into people if you all use the same stairs, which can boost communication, relationships and creativity.

*Hopefully not literally – it’s a long, long way down.

Corner offices are not making a comeback. Overinflated hierarchies and silos are so 20th century. But many argue the last century’s solution to this – open plan – is harmful for our wellbeing, because it violates our need for privacy, peace and quiet, particularly if we’re of the introverted persuasion. One solution, much to my understandable dismay, is the work pod. 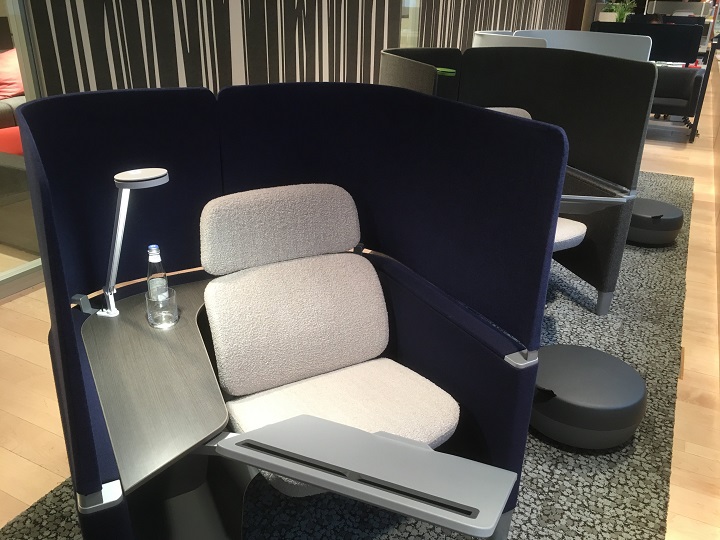 Thankfully, the work pods at the LINC (called the Brody) look more like a first class seat on Lufthansa than a prop from a 90s sci-fi film. They provide a surprising degree of seclusion, not to mention comfort, without requiring a separate room. All it was lacking was the complementary drinks and hot towel service. Maybe next time, eh? 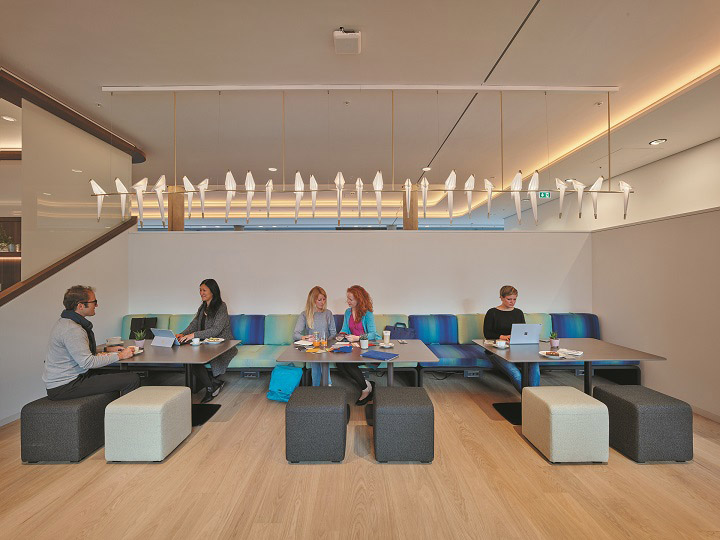 Variety is the spice of life (not clove, as I had long suspected). Personality, task and mood all affect what space you’d work best in. The challenge for a modern office is to create a wide range of options while not segregating the workforce into the ‘quiets’ and the ‘noisies’.

In the LINC, the solution is using divides, corners, corridors and mezzanines to create a large number of spaces that are distinct but not separate. Different colours and materials help to give each its own identity, without feeling like you’re in a different building. This space, for instance, is for ad hoc meetings, much like an airport lounge. 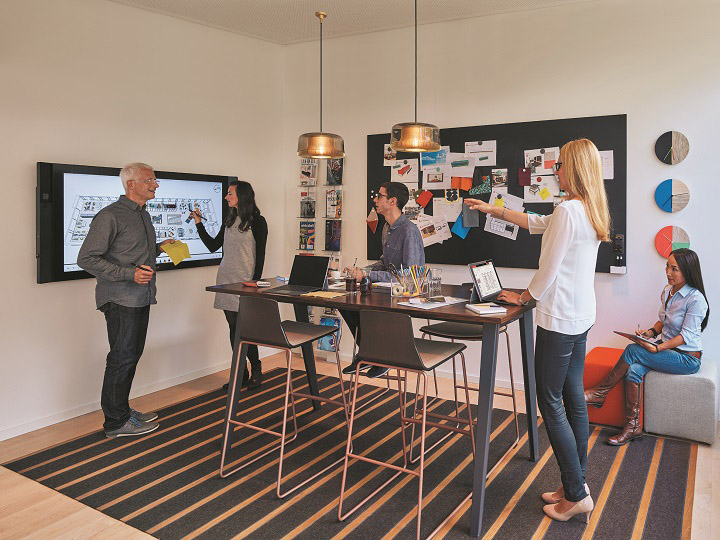 At the LINC, blackboards and Lego mingle happy with iPads and funky visualisation desks. If we want to encourage creativity (which in the age of job-stealing AI will probably be a must-have) we’ll need to allow different ways of expressing and communicating ideas. 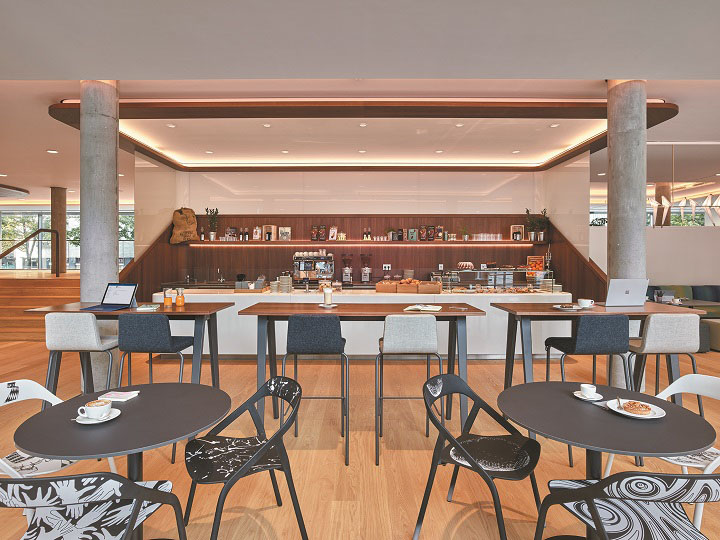 One thing that strikes me about the LINC is that it’s hardly bustling with people. There are a lot of spare seats and there’s a reason for that. There has to be room for employees visiting from other offices, so that they feel like part of the team and not an afterthought. (Admittedly not the easiest thing to budget for if you’re based in, say, central London or Manhattan. Maybe there’ll be more money in the future…)

‘We could put more people here, but we have to accommodate for all those people who are not based here – they have to feel really supported and accommodated when they do come,’ explains Guillaume Alvarez, Steelcase’s EMEA SVP.

You cannot change a culture by changing the space, no matter how cool the architecture. Hopefully in the future we’ll have learned that lesson, and make sure our spaces reflect the people who work in them, rather than trying it the other way round. ‘In our personal lives, we try to create an atmosphere in our homes that reflects who we are, what we do, our passions, our style,’ says Alvarez. ‘There’s nothing wrong with designers of course, but you can’t delegate that.’

*There’s no picture for authenticity – it’s invisible, but you know it’s there.